From the HRA Journal: Issue 291

We just had a civic holiday in Canada and resource traders surely felt like they needed one. If only so they could go another day without looking at their trading screens.

The main editorial is all about sentiment which is strongly and firmly negative for precious metals. Negative enough that it may generate a bounce soon though we'd be better off if a reversal came from some "event" that really cleared out short positions. Any number of things could create the spark that leads to a reversal though I don't see an obvious and immanent candidate at the moment. I do think things are now so negative that we can expect to see things start going our way "soon" on the gold side.

It continues to look like the bottom is in for base metals though the US-China sabre rattling on trade hasn't ended. There should be a lot of base metal reporting from HRA companies soon, starting with a resource update from Vendetta—wait for it—in a day or two.

Speaking of events, registration is open for the Metals Investor Forum on September 28th—29th in Vancouver. A lot of prior attendees have registered so get your seat while you can. I've just started inviting companies and will have more on that next issue. Hit the link below: https://www.eventbrite.com/e/metals-investor-forum-28-29-september-2018-registration-37313435490?aff=hra

It's fair to say, if you like gold, you probably see yourself as at least partially as a contrarian. Some would say completely contrarian, but I would resist that label. I follow a lot of metals and they respond quite differently to market forces most of the time. I don't consider myself a "gold bug", in the sense most people mean it at least. The world doesn't have to be going to hell in a handbasket for the gold price to rise.

Gold bugs, unfairly in many cases, are viewed as expecting, indeed cheering for, disaster. Their interest is mostly monetary—they view gold primarily as money (or at least as the most reliable store of value) and the "real" rally will come when other currencies face collapse, or at least collapse relative to gold's value itself.

That's part of the story, but it doesn't require an end of the world scenario. Many would argue that gold's best years came in the 2000s. That was an era that included one of history's biggest crashes, but that didn't account for much of the move in gold prices. Most of the heavy lifting happened from 2002-2007. The other, more fondly remembered run, of course, came after the $US gold peg was removed in the 1970s. That move was more about inflation and price seeking after its last official tether from and important fiat currency was removed.

A lot of gold's move during the 2000s, as you know, was directly related to another long downtrend in the USD Index. There were several factors that drove that downtrend, but economic collapse wasn't one of them. A combination of Euro strength (and Euro existence), low real interest rates and huge current account and trade deficits created a long period of strong negative US Dollar sentiment. The tail end of the move—after the Great Recession—was also driven by negative real interest rates in the US and just about everywhere else.

Currently, we're living through opposite market conditions. I've said before that, as important as it is, the USD isn't the only factor that influences the gold price. The two charts below show the USD and gold price for the past three years. I drew horizontal lines through the current price level for both, so you could see where the USD and gold were priced in relation to each other at various points in the past three years when the USD Index stood at 95. 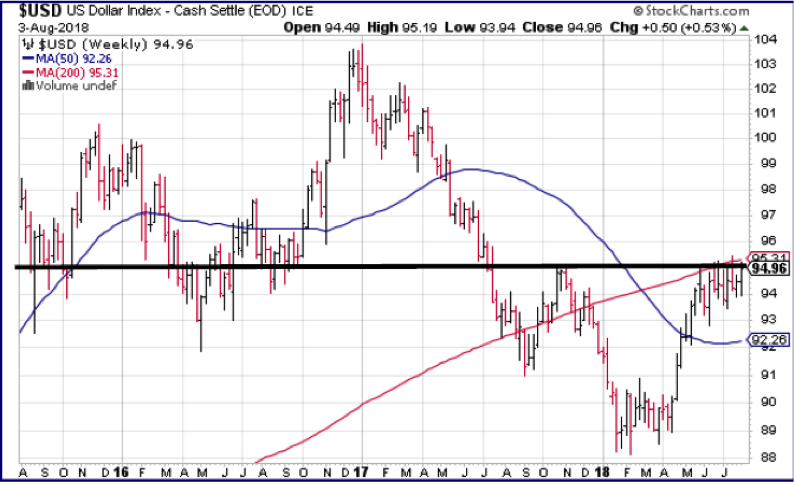 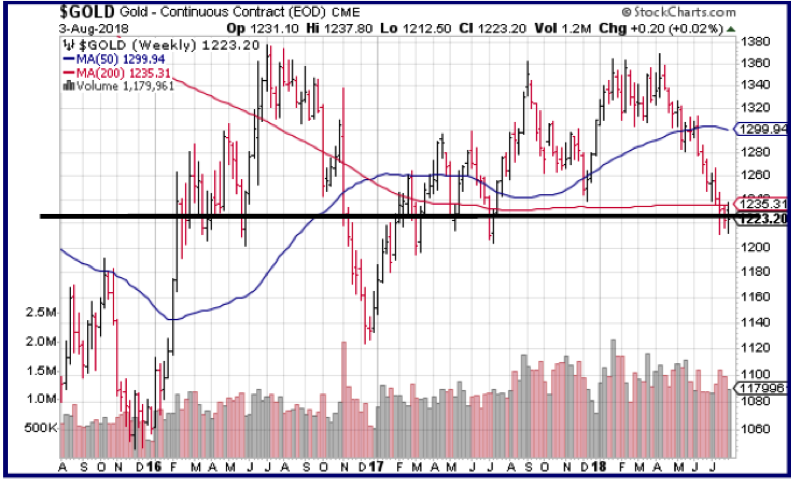 In most cases through the past three years, gold prices were anywhere from $40 to $100 higher than they are now when the USD was at 95. The USD has a huge impact on gold prices, but it seems there are other forces at work. One of those appears below. The strong rally in the inflation adjusted 5-year TIPS yield into positive territory since the end of 2017 has also helped push gold lower, especially in the past three months when real yields and the USD were moving higher together.

The most recent drop in the gold price came after the last FOMC meeting, and just ahead of the July payroll report. The Fed didn't raise rates but made it clear they still plan another two 2018 hikes, most likely at the September and December meetings.

That news, plus "positive" inflation news, pushed the 10-year Treasury note yield back over 3% and the TIPS yields to their recent high. The latest bounce in the gold price came after a slightly lower than expected employment growth numbers and news that year over year wage gains—again—failed to increase.

Notwithstanding the bounce off the latest low, we're faced with an extremely negative sentiment environment for gold and, to a lesser extent, other metals. As always, we must decide whether to follow the crowd or take a contrarian view.

The biggest problem with depending on sentiment measures is that they aren't very useful as a timing guide. There's more than a grain of truth to that old chestnut that "the market can stay irrational longer than you can stay solvent".

While sentiment measures won't usually help much with timing, it's also true that sentiment extremes, like most extremes in the market, don't last long. Large markets are consensus seeking—extremely unbalanced markets, either bullish or bearish, don't take long to reverse.

That's where we're at now with the gold market. The chart below shows 12 years of Speculative short positioning in gold. Speculators have never been this short gold before. Not even close. Large speculators and hedge funds are short by enormous amounts. 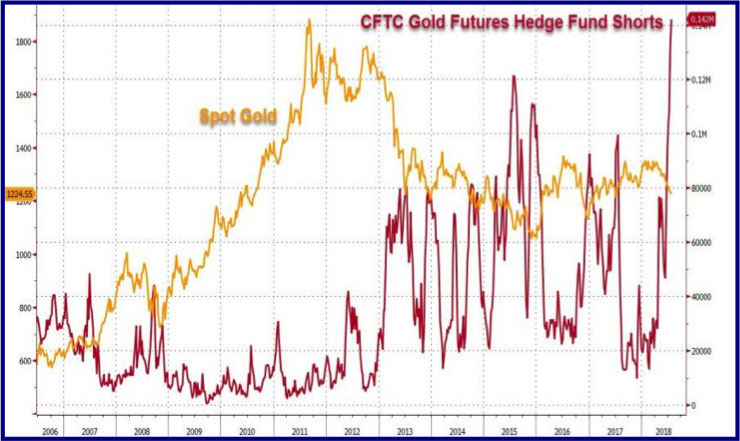 I'm not saying it happens tomorrow, but positions like that are always subject to mean revision. If you look carefully at the chart, you'll see that several previous spikes in speculative short interest, all smaller than the current version, quickly reversed as gold prices rallied. Indeed, the short covering was some of the main fuel FOR those later rallies. And, historically, speculators have a dependable reputation for being wrong at market turns. 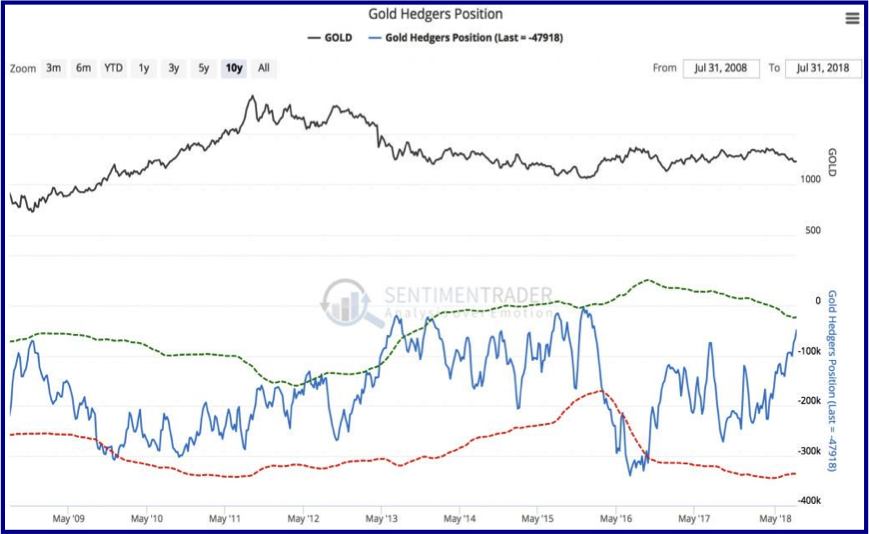 In some ways, the chart immediately above is even more interesting, though I think it's perhaps less "immediate" than the spec positioning. This 10-year chart is focused on positioning by large Commercials, or "hedgers". As the name implies, these market participants are not trying to guess future price direction. They are producers or large end users who are selling to lock in future prices and attain certainty about revenues. As such, they are virtually always short the market. What's interesting, at times, is variations in their overall short position.

In 2016, for instance, when gold was having its last large price rally, Commercials were selling in increasing amounts to lock in higher prices. You can see the large increase in short position during the first half of 2016 as they did this.

Lately, Commercials have been closing out short positions, or at least not opening new ones. These hedgers are currently about 45k contracts short, less than average. I'd like to see that number move much closer to zero. Commercials have a much better track record than speculators in the gold market. I'm not expecting Hedgers to get long to any real extent, that's not what they do. But a short position close to zero like we saw in late 2015 would give me a lot of confidence we're at or very, very close to a major bottom. 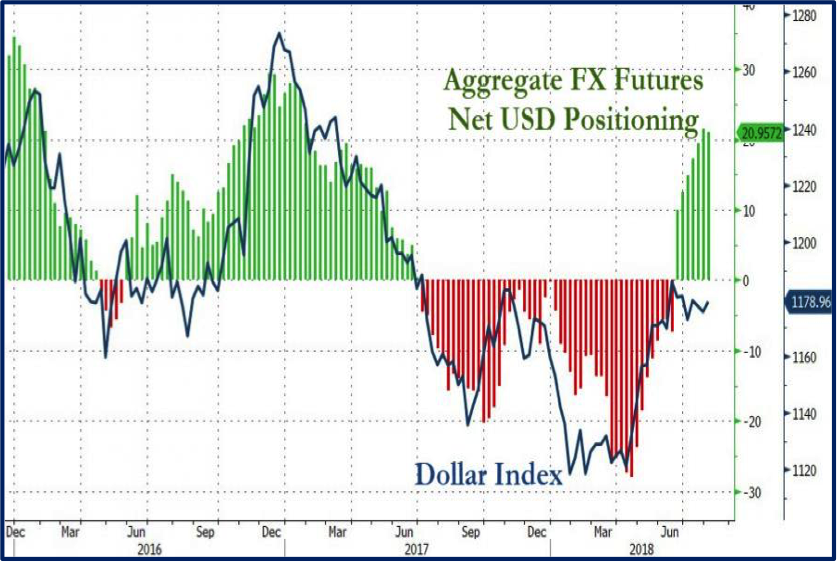 Sentiment and market positioning—wise (putting on my contrarian hat) things look very good. Even so, the gold market is still a rocket on the launchpad, waiting for ignition. Several things could serve the purpose. A general market correction should work, though it doesn't look much like there is one on the horizon. A real inflation surge, 1-2% in the space of 2-3 months, would drive down real interest rates faster then the Fed would dare to try and keep up with. That would light a fire under commodities. This still doesn't look likely, though inflation surges tend to sneak up on you.

Short term, the biggest conundrum and potential catalyst remains the US Dollar. The chart above shows speculative positioning in that market plotted against the (Bloomberg) USD Index. Speculative positioning has moved from 30,000 contracts short to 30,000 contracts long in the past three months. That is a large long position but not unusually so; it hit that level a couple of other times within the chart which stretches back to the end of 2015.

What I find most interesting is that this surge in bullish interest in the USD hasn't translated into the same sort of rally the last two did. It may just be a period of consolidation. We won't know for sure until the USD makes a real move again. But if that much buying can't move it higher, a flagging of bullish interest could generate a strong price reversal.

I'd prefer something more "fundamental" but I'll take sentiment driven move if it gets the ball rolling. Keep an eye on the USD. It looks like it may hold the key to how good an autumn resource players have.