Priced In or Priced Out?

The major markets are refusing to view anything as bad news.  Weak economic reports mean the Fed will hold off—good ones mean it doesn’t matter if they do.   With all that positivity it’s hard to know what is priced in these days.   Everyone is buying into the script that any weakness in Q1 was just weather related and will soon turn around.  The fact that most April indicators haven’t really done that doesn’t seem to faze anyone.

We’re into earnings season now.  As I note in the editorial traders need to hear lots of positive forward guidance.  If they get that they won’t care if earnings are down overall which they will be.  It’s all about tomorrow.

This backdrop has made it tough for gold and commodities to stage a rally though it’s held up quite well given the strength of the Dollar.  Oil may have turned and this could help ease deflation fears which are part of the bearish narrative for gold.   The other short term issue is Greece which just won’t go away.  There is yet another set of deadlines right ahead and it doesn’t look like Greeks are ready to step up.

We’re still waiting for the financing window to open in the resource space.  That has made me cautious about all but a handful of companies.  One thing worth looking at is the USD Index chart on page four.  That is an interesting set of historic curves that DON’T fit the Wall St narrative but might just fit ours. Stay tuned.

It’s been an interesting couple of weeks in the markets.  There were much anticipated economic readings in the US that were big (usually negative) surprises. While those readings, especially non-farm payrolls, generated big initial reactions it’s impressive just how quickly traders shrugged them off.

The three year chart for non-farm payrolls appears below.  The March number was a pretty huge miss.  It highlights how tough it is to extrapolate weekly jobless claims number into a decent payrolls guess.  The numbers are generated totally differently by different bureaucrats.  Traders took the weak number as a signal the Fed would hold off rate increases and bid markets up. Analysts insist it's all about cold weather and everything will bounce back this month.  Perhaps, though the number of people telling the BLS they couldn’t work due to bad weather wasn’t much higher than the average month. 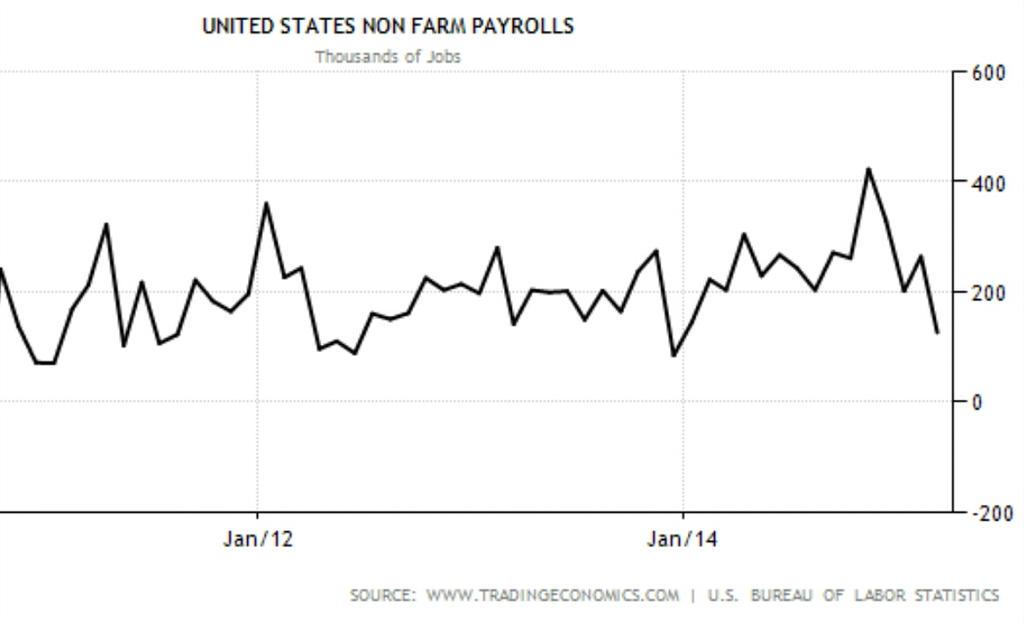 With firmer equities and oil prices traders are again expecting inflation to lift a little.  Most assume the Fed is still thinking about a June rate increase.  The second big data point was the March Consumer Spending number.  It disappointed too, but only slightly.  Spending was up, but by less than consensus and that came after three months of contraction.  Analysts expected a bigger bounce but, again, think that was a blip.  We’ll know soon enough.

The stronger oil price is also calming traders who view it as yet more evidence that Q1 weakness will be transitory.  I think oil pricing is more about supply than demand lately.  Production still isn’t falling off but might be topping.  The jury is still out but oil price bulls are buying hard enough to lift the market price regardless of inventory levels.

All these factors together have led to an eerie calm in the markets.  Volatility readings are extremely low across all markets.  NY markets are close to their all-time highs and the Dollar Index is less than a percent off its recent peak.  You’d expect gold to be trading more poorly against this backdrop but it has held most of its “post-FOMC” gain and its negative correlation with the USD has weakened again.  The Euro on the other hand is almost back to its March lows.

The chart below shows the latest actual and consensus estimated for the S&P 500.  Looking at the Q1 estimate brings home just how much recent weakness is being shrugged off by traders.  Overall, Q1 earnings are expected to fall 6% on a quarterly basis and to remain below Q4 2014 levels until well into Q3. 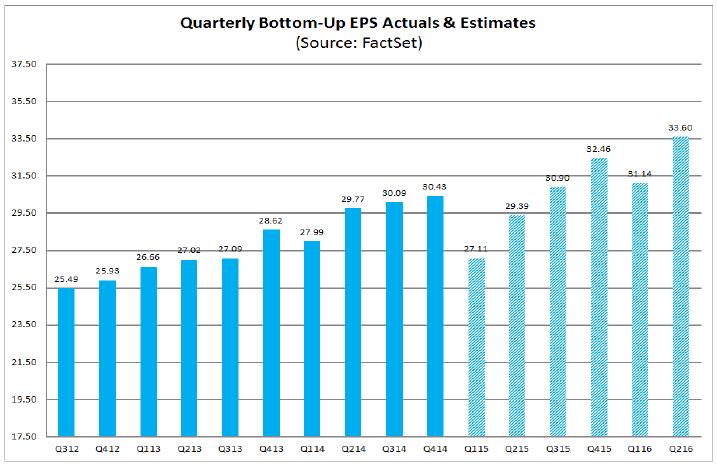 Keep in mind that Wall St analysts have a habit of guessing high then lowering estimates as companies “guide” them in as the announcement date approaches.  If history is any guide we could see negative Year over Year earnings comparisons right until yearend.

Again, no worries here.  The market is taking all this in stride.  The drop in oil prices is a big factor in the profit drop.  Wall St expects oil to bounce back and earnings with it.  Whether other reasons for weakness dissipate remains to be seen.

As long as everyone sticks to the narrative this may work out but we should be wary of any more downward pressure on earnings.  Markets holding current levels through a flood of negative earnings will require lots of earnings calls with positive spin.   If forward guidance from companies is lackluster or negative US markets will pull back.

I talked about the negative impact of the rising dollar in the last issue.  That should be kept in mind as the greenback looks like it may reach and perhaps breech last month’s high.  If the dollar keeps moving up expect to hear about it in a lot of earnings calls and not in a good way.

I’m not sure a bunch of CFOs talking about how bad the pricey dollar is going to generate a pullback in the currency. Positioning is very one sided so we could see large swings but just about everyone expects the USD to keep climbing.

China has released a very poor trade report for March. Few expect Beijing to weaken the Yuan intentionally but most expect increased stimulus efforts and perhaps more rate cuts.  The ECB is in full QE mode and virtually everyone expects the Euro to keep weakening as bond yields get driven lower and lower across the EU. 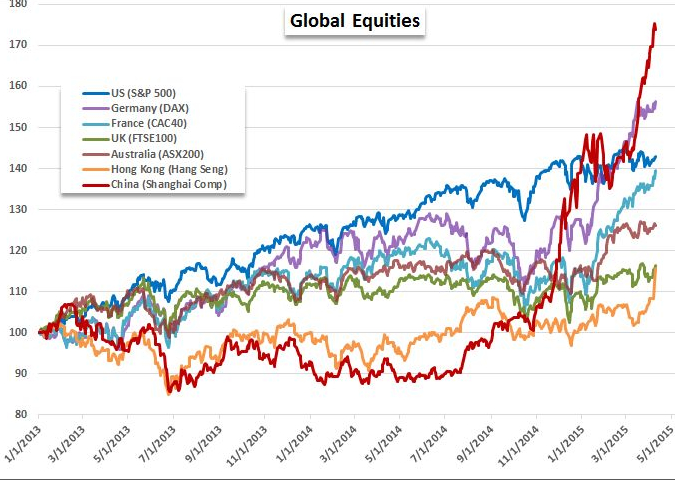 The graphic above shows how much QE or at least the expectation of more central bank or fiscal stimulus has been driving markets.  The graph starts at the beginning of 2013.  Using that timeline as a base the US has the second strongest gains.  That is mainly due to QE2 however.  If you look at the right side of the chart covering the past few months the picture is very different.

Since late 2014 German and French equity indices have had far stronger gains than the US.  This is directly related to expected gains from QE and the weaker Euro.   By contrast New York has been fairly flat.   Wall St always expects the markets to zoom higher soon.  If these rallies are mainly about stimulus effects they might be overconfident in that assumption.  That is especially true if the Fed actually goes through with a June rate increase.

The one country that stands out in the chart is China.   Shanghai is having one of the strongest rallies ever.  This index has doubled in the past eight months and shows few signs of stopping.

With the property markets cooling everyone’s favorite punt is now the stock market.  There have been record account openings by new brokerage house clients, mainly ones with no market experience.  Margin buying is also increasing rapidly.  These things can go on longer than anyone expects but this sounds a lot like NASDAQ circa 2000 and we all know how that turned out.

I’ve seen plenty of recent articles about how Shanghai still isn’t expensive. That’s based on assumptions about profit growth that might be optimistic if the lousy export numbers are any guide.  Even if large Chinese enterprises manage to step up profit growth charts as vertical as Shanghai’s don’t end well.  If you look the trace for Hong Kong’s market you can see it too is starting to go vertical as China “H” shares inter-listed on the Hang Seng get driven higher.  Let’s hope Beijing relents and jumps on the stimulus bandwagon.  If not, look out below.

Gold and commodities continue to be slaves to the Dollar.  Currency moves have become such a focus for traders that they periodically overwhelm supply/demand conditions for individual commodities. The top chart on this page shows inflation adjusted 10 year yields for several major economies.  You can see the real US rates have been rising since mid-2014, mainly due to falling inflation.  Spain and Italy have higher real rates.  They should be based on risk differentials but, again, a lot of this is due to deflation in those countries.  Traders have been “risk on” across EU debt markets ever since the ECB started promising QE.

The country getting the best deal (paying the lowest yields) is Germany.  This is due to the strength of its economy though QE buying is helping there too.  For all the hand wringing by German politicians the country is getting the best end of the bargain—as long as it’s fellow EU debtors don’t default on it.

The bottom chart is the most interesting to me and may give you some reason for optimism.  It compares the trajectory of the US Dollar Index through four separate Fed tightening (rate increasing) phases.  Whether we get much of a tightening phase this time remains to be seen. 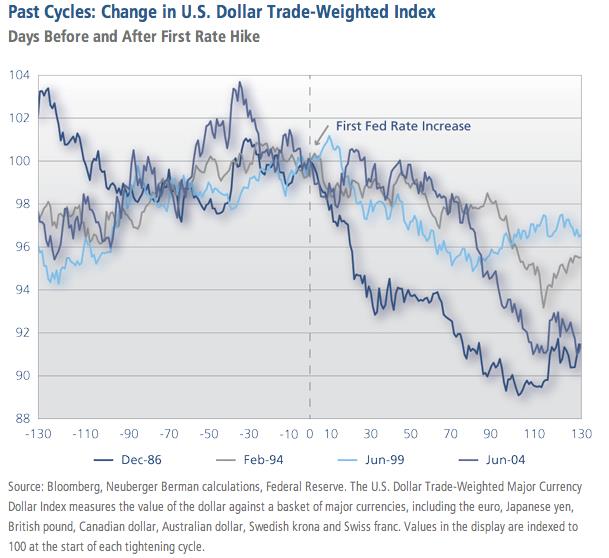 While Japan and Europe have active QE programs which is different than past US tightening phases the chart is nonetheless instructive.  The story it portrays is the opposite of most traders’ expectations.  In all four of the previous tightening sequences the USD strengthened before the initial rate increase then weakened after rate increases had begun.  In the case of the 1986 and 2004 rate increases the drop in the Dollar Index was almost 10%.

That is definitely not what traders are currently positioned for.   Will we see a repeat if and when the Fed finally pulls the trigger? I think the QE measures, especially in Europe, may weaken the negative effect. I do think we could see a “sell on news” if the Fed pushes through a rate increase though.  Traders are just so long Dollar and short Euro that some are bound to take profits.  That alone could give metals and especially gold a boost that few expect.  Not all surprises are negative.

Join HRA’s Free List Now and Receive the Latest Editorial, Media Interviews and Special Reports from HRA for No Cost! Click here now to sign up.