Markets, or rather the inter-relationships between markets, just seem to get stranger.  The US puts out weaker than expected economic readings but bonds locally and overseas trade like the odds of a rate increase are better.  That doesn’t translate to the US Dollar at all which seems to be falling off its pedestal.

The falling dollar lights a fire under a number of commodities, even hapless iron ore, but has no positive impact on precious metals that have a currency trading component.   It’s hard to know which market you should trust or take a cue from, assuming you should trust any of them of course.

I haven’t seen convincing evidence we’ll see a big bounce in US economic readings.  The falling dollar is genuine good news though especially for the manufacturers.  The bump in oil prices which is feeding through to gasoline prices may impact consumer confidence a bit.  Seems you can’t win.

US April payrolls come next.  That might finally give precious metals some impetus if it’s below consensus.  It wasn’t all bad.  There was good news from a handful of HRA list companies and for the most part the market gave them some credit for it.  The company highlighted this month should deliver good news soon too. We may finally be seeing the market differentiating the good, the bad and the ugly.  That is a good thing and required before we see a lasting advance.

Markets seem to have gotten more bipolar in the past couple of weeks.  The US Dollar index has finally had the rollover I was expecting.   I’m not assuming yet that that was “it”.  The overwhelming consensus on Wall St is still that the greenback has to go higher once the Fed finally starts its tightening cycle.  As you know, I don’t happen to agree with that consensus but I don’t underestimate the power of the herd when it comes to things like this.  The fact that the USD didn’t rise the last four times the Fed tightened, as I pointed out in the last issue,  seems lost on everyone.  Strange.

Even stranger is that the Dollar’s fall is occurring against a backdrop of (presumed) increased hawkishness by the Fed after its latest meeting.  Why more hawkish?  I have no idea.   I read the same Fed statement after the April meeting that everyone else did.  I didn't spot much of a change in tone at all and I was looking for hawkish.

The chart on the top of the next page may back up that trend.  The TNX 10 year bond yield index has risen over 30 basis points in the past couple of weeks.  Not a huge move but indicative of bond traders that think they have seen the bottom when it comes to yields.

The same thing is happening to a lesser degree in Europe.  After reaching record lows, bond yields of some of the stronger economies are increasing slightly. Fear of deflation and QE buying by the ECB drove a lot of money into the bond markets this year.

Some of the driver for this may be increased inflation expectations.  Inflation is a relative term here.  From the start of the year deflationary forces have been gathering across the larger economies.  One of the most visible aspects of those forces has been the price of oil.  Oil appears to have bottomed and that may be the cause of altered inflation expectations.  It’s not based on incoming data yet, other than some commodity prices.

The second chart on the next page displays money flows into or out of inflation protected bonds and mutual funds.  The turn here is dramatic, with massive inflows in the past couple of weeks, the highest on record in fact.

Who’s behind these flows?  I don’t know but it looks like it’s not Mom & Pop given the scale.  We’re probably dealing with a chicken and egg situation here.   Slowing US growth and money moving into European stock markets, Wall St’s latest version of the Next Big Thing, has put another top in on the Dollar Index.   A falling currency starts bond traders thinking about potential inflation impacts. 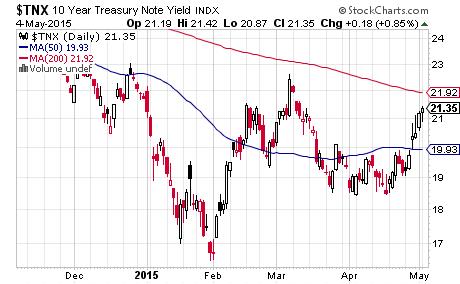 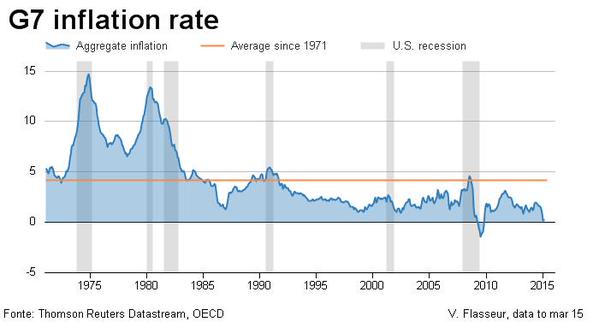 The chart above shows inflation for the G7 countries as a group.  It’s probably a lagging indicator but it’s certainly not justifying flows into inflation protected vehicles.  It may be that it has bottomed, especially if things have finally stabilized in Europe which they seem to have. So far though the inflation is definitely of the “assumed” rather than “actual” variety.

The next chart shows the Euro in USD terms.   I feel pretty vindicated by this chart though it’s too early for a victory lap.  I seemed to be the only person who expected the Euro to come back when it was getting demolished after the ECBs QE announcement.   It’s trading at $1.13 as I write this. 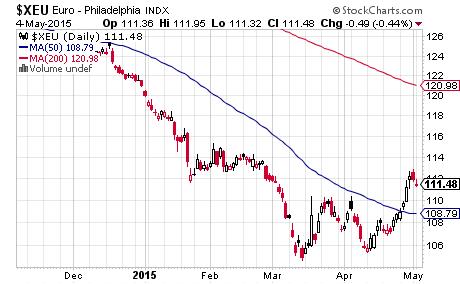 Does the Euro go to parity and below as most still call for?  Anything is possible, especially if the US Fed were to go into hard tightening mode.   I doubt we’ll see more than one or two token rate increases this year though, at most.

Also, as I have noted before real interest rates are what matter.  If traders are convinced the deflation threat is passing and that the US would see an inflation pick up first it could still have lower (and probably negative) real rates even with a couple of 25 basis point rate increases factored in.  That might explain some of the currency market action.

The swing in the Dollar and an opposite move in oil, base metals and other commodities seem to be reinforcing each other.  Both oil and copper are popular long bets when the economy is strengthening and as Dollar hedges.  The copper chart above shows one of the best runs in recent years.

After getting pummeled in February copper has had a very strong run and is technically on the cusp of a new bull market.  There have been a couple of supply disruptions but nothing major and there haven’t been unusually high inventory drawdowns.

Its hard to credit these moves as economically driven.  China is the big dog in the copper market and it’s certainly not putting up big numbers.  Growth has continued to slow there and most recent metrics are below consensus. Traders are optimistic that Beijing will roll out more stimulus efforts.  That has been driving the Shanghai stock market higher and might be helping copper too.

The story s the same in the US.  Q1 growth came in at a weaker than expected 0.2%.  More recent March readings, specifically the trade deficit, were worse than expected. The larger trade deficit will be subtracted from GDP for the next revision and its quite possible Q1 will actually show contraction.

Numbers have been better so far in Q2 but not a lot better.  Certainly there is no evidence of the big bounce Wall St was hoping for. Again, it seems moves in base metals and oil are being driven at least partially by currency movement rather than changes to the supply demand balance.

Ironically, if some of this is changes in inflation expectations, its not translating to the gold market.  Again, the market seems bipolar on the whole subject with a lot of traders clearly viewing the odds of a near term rate increase higher than they did a short while ago.   That is the only thing that explains some of the recent market activity to me.

Gold reacted very negatively to a strong weekly unemployment claims report and to a couple of other marginal readings. More than anything else in the market gold is being traded as the “anti-Fed” and every piece of positive news has hurt it. This is happening even though the US Dollar itself has not been trading more strongly on the release of good readings.

The drop in the USD has started to get some press but its not really that large yet.  The Dollar is still trading about 20% higher than it was a year ago, a level that will continue to crimp export earnings in the US.

The next big reading is the April payroll report. The “winter dip” narrative is still in play.  Consensus estimates have barely fallen even after last month’s big miss.  A strong reading—say 300,000 or more new jobs—could reverse the dollar slide and weaken gold prices.  Conversely, a number below 200,000 would take the idea of a June rate increase (and maybe a September one) off the table for most traders.  Gold may finally get the gains the recent drop in the $US implies in that circumstance.

We’ve seen better reactions to some news the past couple of weeks but we’re still waiting for a decent financing window. Gold should be higher based on outside markets.  If the market dichotomy resolves itself after the next payroll report we could get a rally.