So Far So Mediocre

From The February 2013 HRA Journal

Juniors are still in flat-line mode (on a good day). A bunch of new resource estimates were not enough to make much difference though in my experience they often don't. There are enough people tracking most stocks that the market tends to have a fair idea of what a resource estimate will look like. Weakening gold and silver prices dampened the impact of even good numbers.

I had hoped to come away from the January conferences with some new idea. There are a few stories I'm going through due diligence on but nothing jumped out at me. I'm hoping something does as I have become more and more convinced that what this market really needs is something new. I wouldn't expect traders to pay up for anything ahead of results but a story that hasn't been worked over by the market seems to be on most traders wish lists. Companies on the HRA list with new targets should all be drilling within 2-3 months. Hopefully one of these delivers the positive surprise the juniors desperately need.

I still expect at least a moderate rally in the juniors later but the sector is back in the danger zone. We need to see a bounce from current levels soon for that narrative to maintain any validity. If this year does turn out to be a "2009-lite" we should start seeing evidence in the next month or so.

Six weeks into the new year and there is still no joy for junior resource traders. In the large markets there has been plenty of good news, with several exchanges hitting multi-year highs. In our little corner of the market however, gloom predominates.

I've noted in print and in a couple of recent investor presentations that the current conditions remind me in some ways of 2009. I'm referring to the junior market specifically when I say that.

The chart below shows the TSXV index for the year 2009. Before going farther I should stress that I am not expecting a gain for the year in 2013 anything like that the Venture delivered in 2009. That would be nice but it's very unlikely. My references to 2009 have to do with market conditions at the start of that year which were unusual.

Keep in mind also that we're talking about the Juniors specifically. The economic and major market backdrop was obviously much different in 2009.

As the chart below shows there was a "Santa Claus" rally that lasted into mid-January before the first pullback. The first rally was a reaction to both the tail end of a four month up leg in the gold price and a horrendous tax loss selling season. Strong though the short term rally was, it is better classified as a "dead cat bounce". It wasn't until sometime later a real rally started. 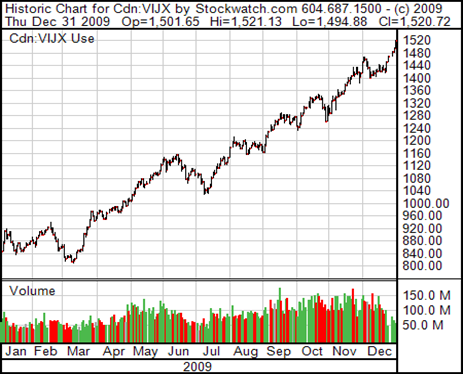 Gold price moves sustained a second short rally into February 2009 until it was knocked back by the final drop in the major markets and a simultaneous pullback in gold prices. All in all, the market really went nowhere for the first quarter of 2009.

So far this year, we've definitely held to the "going nowhere" part of the script. The Venture index is now back to the range it bottomed at in December and the summer of last year. If we do manage to generate any upward momentum it's unlikely we'll have to worry about a "PDAC Curse" this year. Like 2009, there would not have been enough of a rally by the end of February for that to be an issue.

In 2009, the market turned up in mid-March and with the exception of 2-3 small pullbacks never really looked back until 2010. The Juniors were following the senior markets and commodity prices, both of which had similar rallies.

This time around the major markets are close to the highs they started their 2008 falls from. While I expect the large markets to have an ok year there certainly won't be a monster 2009 style rally to drag the juniors higher.

There should be enough good news on the economic front to move some commodities higher. We noted strong rallies in iron ore in the last issue. Base metals have held up relatively well. This means most of them, like the large indices, aren't in a position to stage major up moves from here.

The market has not been paying up for base metal discoveries lately anyway, unless there is a good precious metals kicker. That could change but I don't expect much help from that sector as it is small.

With those drivers discounted, what do we have left? To my mind we have three potential game changers; precious metal prices, discoveries and ...boredom.

Gold and silver have not behaved well recently. That is one reason for the latest failed rally. With the US performing relatively well there is no reason to expect gains from a falling US Dollar. The most recent down move resulted from stories that the G7 would act to stop members from devaluing their currencies.

The obvious target for that was Japan. In the end though, the G7 backed off and I suspect when the G20 has its meetings it will leave Japan alone too. Everyone recognizes Japan has to find a way out of a deflationary spiral and the Yen has been expensive anyway. If further falls in the Yen help Japan out of the corner its painted itself into most governments are willing to live with it.

The more cynical reason for leaving Japan alone is that other major currency blocks will keep printing themselves. Some of the recent drop in the gold price should resolve itself when the market comes around to accept that.

The move will be larger if Europe can get through some of its political issues. This has weakened the Euro. There have been calls from some quarters in Europe to weaken the Euro as a response to Japan's Yen moves. This isn't likely to happen. Germany is still the most powerful force in Europe and Germans are dead set against the idea of large scale QE. They are still terrified by the idea of inflation.

That terror is shared by few other central bankers and no politicians. Whatever the risks of QE and activist monetary policy, it's what worked in the last three years. That lesson is lost on no one.

Japan is again a prime example for politicians in other states. Deflationary spirals are extremely difficult to break out of. G20 politicians are far more worried about 20 years of Japanese style stagnation than they are about higher inflation. Make no mistake; most central banks will keep printing money.

The physical gold and silver markets remain stronger than the paper one and as several observers have noted, gold has built up a very large short position. It is a good set up for a strong upward move if a catalyst appears. That could be strength out of Europe, more QE from just about anywhere else or "risk on" buying accompanying an equities rally.

I haven't expected large upward moves from gold or silver but the short position in the physical market and ascent of activist central bankers in Japan and Britain could generate a good sized rally with a bit of a push.

Gold and silver moving back up could stop the bleeding in the juniors but it will take news flow and new discoveries to keep things moving.

In strict percentage terms, the current junior stock bear is milder than the last one but it doesn't feel that way to traders. The main reason for that is longevity. 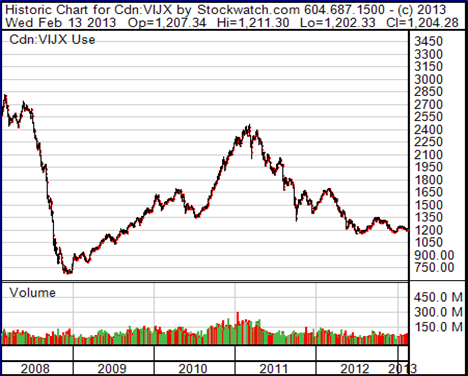 When the junior sector collapsed along with global markets in 2008 the drop was very steep and very fast. Stocks dropped 75% in the space of a few months. The bottom after that fall was brief, lasting a few weeks.

The fall so far this time (ignoring some intervening rallies) the bear market has been two years in the making. The bottom, assuming that is where we are, as been forming for close to eight months now.

There is no reliable way to determine how long a bottom will last. It could go on for a while longer, but I suspect it won't. There are plenty of us sitting on underwater positions but there are also many with cash on the sidelines. Traders are getting bored and brokers are worried because they are not generating commissions. Both groups want to see something happen.

The most likely beneficiary of this situation will be companies with new discoveries that have not disappointed the market. The moves made by Goldquest and Reservoir last year indicate trader's willingness to pile into a successful exploration play. There were a number of these in early 2009 that definitely contributed to the strength of that market. So far this year I have not seen one.

Companies with discoveries will get attention-those with discoveries that don't need financing will receive even more. Pre discovery, attention will be focused on the strongest management groups and project sets.

In 2009 many predicted wholesale disappearance of junior companies. It didn't happen because the financing window reopened fairly quickly. That hasn't happened this time. I think the prediction of several hundred companies disappearing is much more likely to come to pass now. The only thing likely to hold it back is the TSX giving reprieves because it too is a public company now and wants to be able to book the potential listing fee revenues.

Short term painful but long term good. There are way too many junior explorers out there. Far too many companies did multiple spin out transactions of weak project sets they cannot finance now. There are only so many good projects and management/financing groups. I don't know what the number is but it's a lot less than the 2000 companies floating around out there.

Fading companies will hold back the Venture Index. Volumes are not bad over all compared to 2009. If gold can fight its way back to $1700 a base should be built and companies with good resources will see some gains. Like 2009 however, the best gains may be reserved for those with new discoveries. The intersection of hope and greed that new discoveries represent could be the catalyst so many have been waiting for. I'm hoping they start coming soon enough to finally make the market turn.

HRA Advisories, Resource Opportunities and the Oil & Gas Investments Bulletin are pleased to be hosting the annual Toronto Subscriber Investment Summit on Saturday, March 2nd, 2013 at the Royal York Hotel.

For the first time ever, we are opening a limited number of seats to the public. You will receive a full day of access to this private subscriber-only conference with your ticket purchase. This limited seating, exclusive event is designed to provide you with expert insight and specific investment strategies for today's resource market, as well as access to some of the most undervalued public companies in the industry today. Don't miss out on this rare opportunity to meet face-to-face with the experts and their top resource picks!

This event is a sell-out every year. Don't miss out on your chance to participate!