Oops, He Did It Again

From the HRA Journal: Issue 293

So much for tons of results. As I explain in the Update introduction we've got lab slowdowns again. That will clear in coming weeks however.

I don't expect the slow down will affect results from the company that is the Extended Review this issue, thanks to its location. Good drill results are one thing that has gotten attention lately. This company has the potential to deliver impressive results on NEW targets. Make a point of reading that review.

The RSVP list for MIF is getting full. (I see you rolling your eyes. Yes, you. It's true, so don't blame me if you wait too long). Here's the list of presenting companies, invited by me, or others.

Sigh. After a promising second half of August, resource stocks have managed to go nowhere, or worse, since the start of September. Some of this was due to lab slowdowns.

Most of the action in August centered on drill plays that had released a hot drill hole or two. Some of those of those companies put out follow up holes that were less impressive but many more simply haven't reported again.

Resource traders are famous for their paranoia. Many have assumed the worst and sold. In some cases, they may be right, but most companies I've talked to are happy to swear on a stack of bibles that they are not sitting on results. They have no results to sit on.

There has been a lot of selling down in companies that have reported a couple of good holes only to go quiet. This situation will improve, some, when results start flowing again. How much it improves will depend how much a given company still has to report. Some companies should have enough results flow to generate several news releases.

A lot of the companies that have been attracting attention are working in highly seasonal areas like the golden triangle in BC. That will mute reaction to good news if companies end up getting huge batches of results they have to dump on the market in one go. I don't expect that to happen in most cases.

Hopefully, the whole reporting schedule just gets pushed back. That won't stop price erosion if the wait of results is long, but it might give the stock a chance to rebuild momentum if its still issuing a series of releases rather than a "season end dump".

On a bigger picture level, there are some interesting things playing out in the market right now that give us some hope for base metals.

The (fuzzy) chart below shows the Shanghai index going back to the start of the year. It's not pretty. Shanghai has hugely underperformed other large national indexes and technically entered a bear market a few weeks ago. 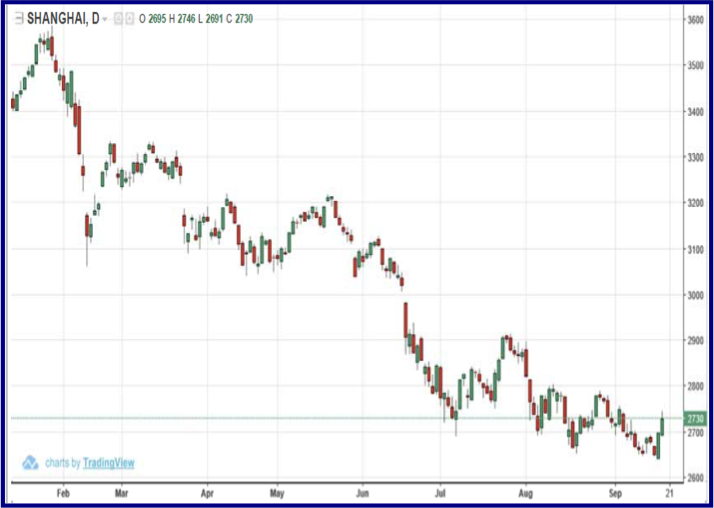 Some of that is due to China's economy slowing, as well as concerns about its financial sector. There's little doubt though, that the biggest negative lately is the escalating trade war with the US. That's what makes the right side of the chart interesting.

President Trump ratcheted things up in a big way a couple of days ago. The US is imposing a 10% tariff on $200 billion worth of Chinese imports. Significantly, Trump is trying to force China back to the bargaining table by promising to increase the tariff level to 25% on January 1 if there isn't a bilateral trade deal.

China responded by adding its own tariffs to $60 billion worth of US goods. China doesn't import enough from the US to go for tariffs on $200 billion or I'm sure they would have. Beijing has made noises about using "other methods" to retaliate but hasn't specified what those might be.

What's interesting is the way markets reacted to the huge expansion in tariffs. If you look at the right side of the Shanghai index chart on page one and the copper chart on below. Both of them had sizable bounces off the tariff announcement. Copper initially dropped below $2.60 but turned around quickly and closed the next day's session at $2.74, a roundtrip of 6% and a very large one day move. 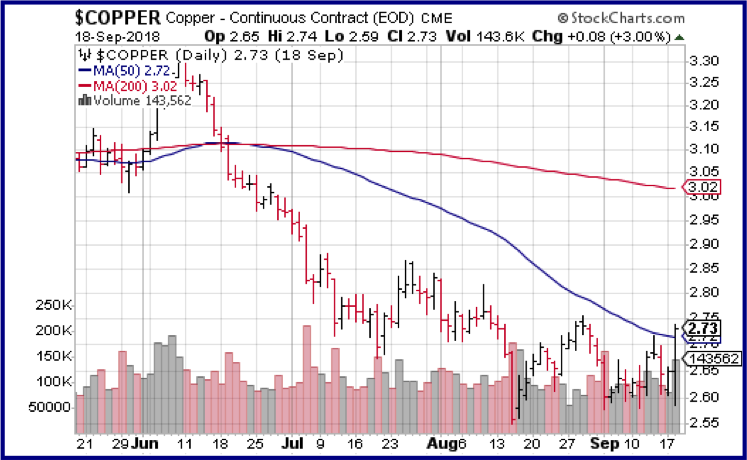 The chart immediately below shows a trace of China's quarter over quarter real GDP growth and a more current Goldman Sachs Activity Indicator, which is generated monthly. 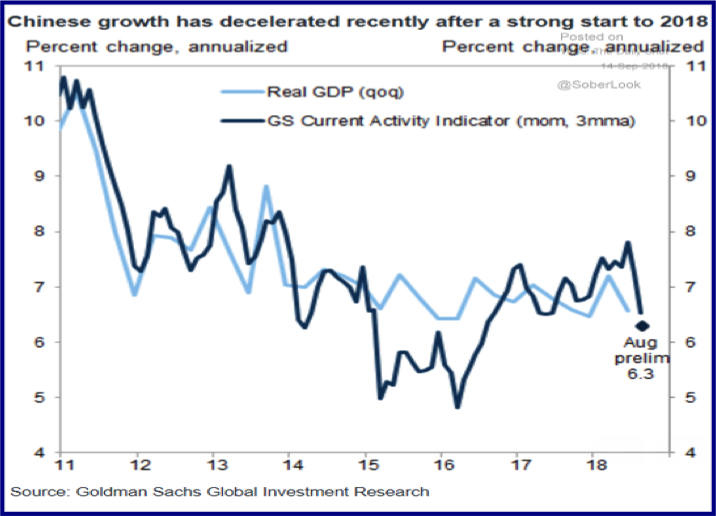 If we're to believe the GS indicator, China is about to see a down leg in its growth rate. That may help explain the recent drop in base metal prices, or at least the excuse for it. So far, there has been little evidence from Chinese import statistics, warehouse inventories or smelter TC/RC charges of a drop in base metal demand.

There isn't much doubt that, if "tariff talk" isn't the sole cause of base metal prices falling, its one of the main ones. There was too much correlation between Sino-US sabre rattling on trade and timing of price drops. Until the latest episode.

What, if anything, changed? The current expansion of tariffs was widely expected as the weeks wore on and the two sides weren't talking. That may have generated "sell on rumor, buy on news" action. That would have been aided by numerous analysts, HRA included, that have pointed out that there is little evidence of demand destruction in base metals, at least so far. Traders were selling or shorting base metals due to growth fears on a full blown, extended, tariff war, not based on actual impacts to metals markets. LME copper inventories have dropped 150,000 tonnes in the last three months and LME zinc inventories are at six-month lows.

We're only two days into the latest round of tariffs. I don't want to sound like I'm underplaying the risk of a full-scale trade war that drags on. If we move to higher tariffs on a larger percentage of Chinese imports and this doesn't get settled it's going to have impacts on both the Chinese and US economies. And, contrary to the beliefs of many in Washington, the impacts on the US won't be small.

Ironically, an Administration that brags a lot about tax cuts is forgetting tariffs are tax increases. They are import tariffs that get paid by US importers, not Chinese companies. Imports are either supply chain items that become parts of US manufactured items, or direct to consumer products. Tariffs will either squeeze margins or have to be passed onto consumers through higher prices.

Recognition of the inflationary potential of long-lasting tariffs, not to mention the potential for them to weaken both sides of the dispute, may explain another pair of contradictory price trend.

The two charts below shows the short-term trace for the US Dollar Index and 10-year Treasury yields. After running to a level of almost 97, the USD Index has fallen back to levels last seen in July.

Interestingly, the Index gapped down after the expanded tariffs were announced. This seems to be traders voting with their feet. It may be concerns about the impact on US growth. It could also be selling out of China either to lift the Yuan, or simply as a "don't mess with us" message. Whatever the case, the USD is again close to breaking down and traders are still very long. There's room for it to go lower.

One reason the move in the US currency is surprising is that it's going directly against what's happening in the bond market. There has been sizable move in yields in the past three weeks as you can see from the middle chart on the page. 10-year yields are back above 3% and close to what many market observers consider the "danger zone" for equities. Wall St certainly doesn't seem concerned yet though. 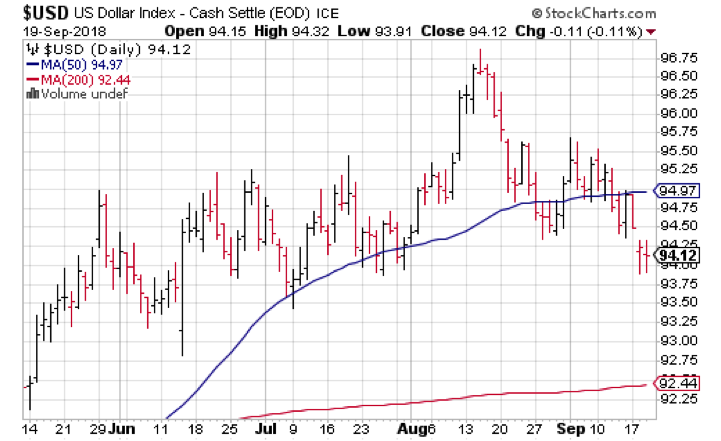 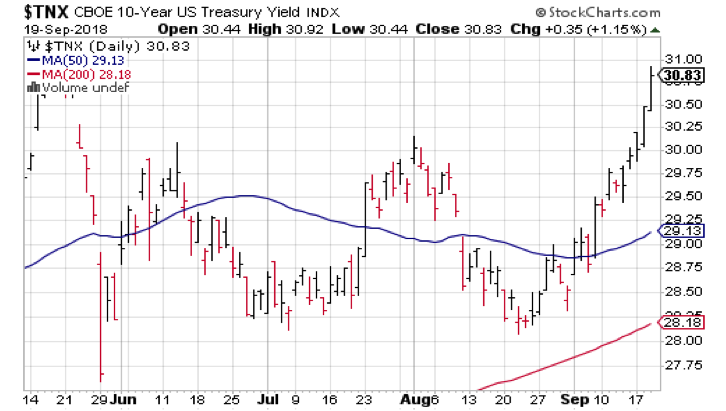 In part, bond yields are reacting to good wage growth in the last non-farm payroll report and the virtual certainty that the Fed will raise rates again this month. Economic data in the US has been a bit more mixed lately and most assume Q2 growth in the US will be the high-water mark. The move in yields will top out at some point but "short Treasuries", betting on higher yields, is still an incredibly popular and crowded trade. When the reversal does come, it could be violent.

The move in yields helps explain why gold continues to have trouble gaining more traction. It's held its price above $1200 well, all things considered. Trade wars will accelerate the move by many countries to lessen dependence on the USD. And traders may be thinking more about what happens when the US economy does slow. The last chart below compared the US unemployment rate (inverted) and the primary US budget balance. 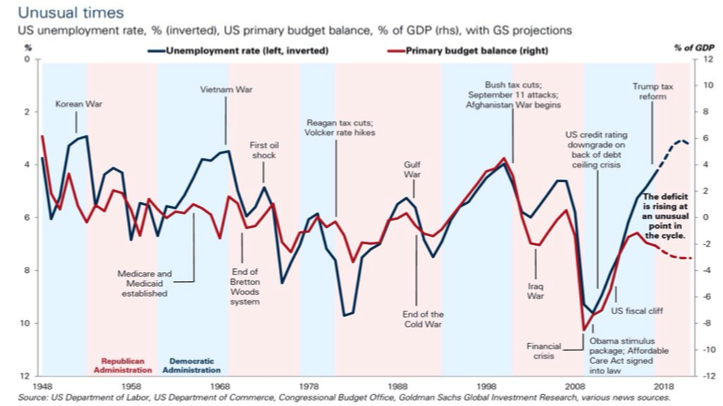 It's a sobering chart. The huge divergence between unemployment and deficits is the shape of things to come. When the US slows, the deficit is going to explode. That could be sinking in with traders, which won't hurt gold prices at all